We at M&G are a team of highly qualified and experienced lawyers.

We provide legal advice with great commitment and concern for the client's well-being. 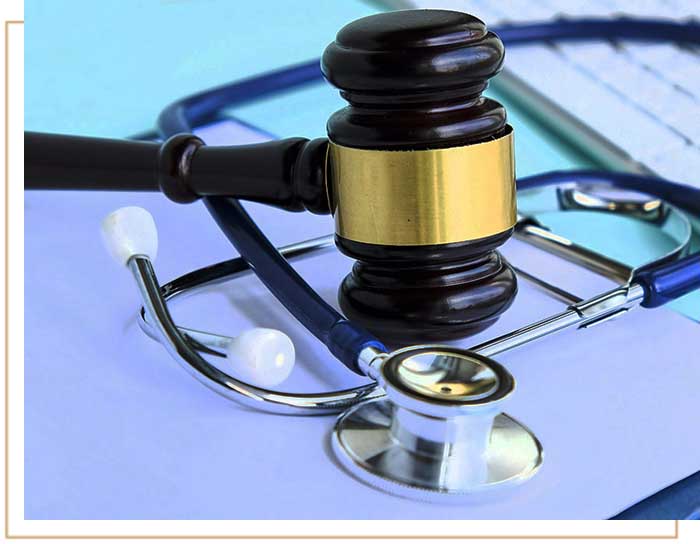 Unfortunately there are cases

where doctors are responsible for errors

Such injuries can be very seriousand can cause damage to health.

The question arises as to whether in every situation physicians, clinics, hospitals or nursing homes are responsible for their mistakes and what needs to be proven in court for such liability to exists in the light of law, and not only on a moral level.

First of all, the very form of court proceedings for medical malpractice is slightly different and the filing of a lawsuit requires an affidavit or a declaration under oath that the case has been reviewed by an expert and that there are grounds for bringing such a claim to court. If such a statement is omitted by a party filing a lawsuit, it may cause the court to dismiss the suit and our case may be lost.

Second, in cases of medical malpractice, the injured person must prove that the doctor has failed to follow an appropriate "standard of care."An expert's testimony is most often required in such a case, and the jury's or even the court's opinion is not sufficient. The reason is simple, the jury or the court usually do not have enough knowledge to determine the proper standard of care. Of course, there are instances where the mistake of a doctor, hospital or nursing home is evident and requires no expert knowledge, e.g. when a doctor removes a healthy kidney instead of a sick one. Another way to prove that the treatment did not meet the appropriate standard, and that is why a malpractice occurred, are professional publications in a given field of medicine.

Another question is whether the standard of medical care should be the same in a large city, such as Chicago, as well as in a small town distant from larger population centers, and where access to professional medical care may be limited. Generally speaking, in Illinois, the standard of medical care is the same throughout the State, however, amedical professional can defend himself or herself that he or she has not failed to conform the treatment to the standard of care existing in his or her local medical environment or that a medical device which was needed was not available. Interestingly, it is also not enough for an expert, another doctor, to say that he or she would treat the patient differently.

If we suspect medical malpractice and a lawsuit is filed, an expert most often will review medical reports of the injured person, transcripts of depositions, answers to interrogatories provided by the doctor accused of malpractice and relying on them and on his or her knowledge, experience and professional literature, will issue an opinion whether or not the standard of medical care was followed.

A doctor may be responsible not only for what we would call the improper treatment, but also for an insufficient diagnostic testor wrong or late diagnosis. For example, a complete lack or incorrect diagnosis of a fracture or late diagnosis of cancer or cerebral hemorrhage, which reduces the patient's chance of survival or cure, can constitute malpractice.

Not only the physician performing the procedure, but also the hospital can be accused of medical malpractice, because the hospital should be aware of what type and quality of services are performed in the hospital walls. In addition, the hospital is obligated, through its nurses and staff, to check the status of patients and to report to the doctors who care for these patients.

When it comes to proving a causal relationship, the patient must prove that the conduct of the doctor or other health care provider has caused damage to the patient. No absolute certainty is required in this area and it is enough to prove that the action or omission of a physician is a more likely cause of the injury than other causes.

Medical malpractice may be associated not only with the treatment and diagnosis of diseases, but also, for example, with the birth of a child, prescribing medication, not obtaining consent for treatment, or post-operative care.

Medical malpractice can have very serious consequences for a person directly affected by such an error and for that person’s whole family. If you suspect that you have been a victim of a medical malpractice, please contact our office to discuss it.

You can make an appointment by phone or e-mail

It is best to provide important information in a direct conversation - at the office.

Bearing in mind the specificity of criminal cases, when legal assistance is often necessary immediately, we are available by phone 847.752.0506 outside the office hours.

Similarly, when it comes to a difficult family situation that requires immediate action, we are available at the above-mentioned telephone number. Each of our clients is to feel safe and confident at every stage of the case: during hearings, negotiations, talks with contractors, law enforcement authorities.

As Polish attorneys at M&B Michalski & Gubernat, we provide security!

If there is a possibility to save unnecessary expenses on the case - we inform you about it.

Do you have any questions or doubts?